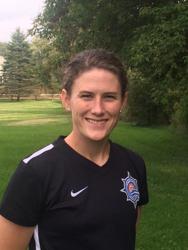 In 2017, NSU Technical Director Shannon Smyth achieved USSF A - Youth License status. In recent years, USSF has undergone several curriculum changes for the coaching education progression. In what used to be an intensive 7-day course, Smyth underwent a development process of 6 months to earn her A – License.

The course consisted of extensive on the field sessions and classroom lectures and presentations. The candidates met for five days on three occasions at IMG Academy in Bradenton, Florida, with assignments and webinars between meetings. The final assessment included a visit to PWSB Soccer Park from Smyth’s license mentor/instructor for a presentation, field session, game and interview.

“The new process truly allows for a development curve over 6 months. We were constantly performing analysis of ourselves, our colleagues and various club environments across the country. I was working alongside colleagues who are current US National Team staff and leaders at MLS clubs, which just shows the caliber of mindset of the candidates,” said Smyth.

As a former Division I collegiate athlete, professional and international player Smyth was eligible to jump to her B-license, but instead worked her way through the licensing from youth modules, D, C, B and eventually the A License. While playing professional in Norway’s Toppserien League and for the Republic of Ireland National Team, Smyth returned home for Christmas and before returning for preseason, took her C and B coaching licenses.

“One of the best pieces of advice from my mentors was never to skip a step. There is always something to be learned and at every course- there was not only educational insight I took on board in the classroom and on the field, but mentors and colleagues I connected with that I still keep in touch with to this day.”

Smyth is currently a head coach and Technical Director at NSU, but is also NSU’s TOPSoccer leader, Olympic Development Program head coach and a coaching education licensing instructor for the Wisconsin Youth Soccer Association.  Smyth “loves being on the field. Each day is an opportunity to flip another switch for a player. Working with my fellow grassroots coaches at the E and D WYSA licensing courses is also a fantastic experience. I get to know our club community leaders in a different environment than opposing benches and we learn from each other. The game is always changing, so you have to be open to adapting and looking at the game through a new lens.”

When asked what’s next, Smyth expressed excitement over the future at NSU and in Wisconsin.  “I love working with youth players and in my opinion, NSU has the most player-centered and forward-thinking mentality in Wisconsin, which is why I am here. I am extremely grateful to NSU’s leadership for supporting my license pathway endeavors. This club’s culture is about growth-mindset leadership and that is why we continue to trend up. Having played and coached abroad for five years, the influence of Swansea City’s academy and partnership is special.”

Smyth continues by saying “I would love to be involved with US Youth National Team Player Identification Centers in the future. With that said, there is a lot to be done in Wisconsin. There is a concept ‘you are what you see’ and we need more credible female leadership in the game. I have had both amazing men and women as mentors, yet its alarming how female leadership has grown stagnate. It’s important to me to be part of igniting a new generation of female leaders in sport.”

It is notable that Smyth is just the second Wisconsin native female to achieve this level.