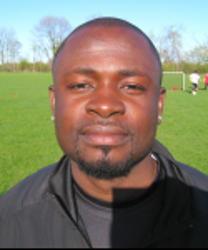 A native of Ghana, Abdul played club soccer for Tema, District 9.  He moved to Wisconsin and played for the Mequon Soccer Club Majors team for 8 years during which time they won 3 state titles and 2 regional championships.

As a coach, Abdul has over 12 years of coaching experience working with players of all ages but predominantly focusing on developing 4-10 year olds.  Prior to moving to North Shore United Abdul was the Director of Micro Soccer (U6) at Mequon Soccer Club during a very successful period for the club.  He moved to NSU in 2011 to assume a similar role as the Director of the First Touch program (U6) and has taken the program to new heights increasing membership and establishing a fun and positive learning environment.  A new crop of young players are falling in love with the game of soccer thanks to Abdul and his First Touch coaching staff.

Away from soccer, Abdul attends Concordia University and is pursuing a bachelor’s degree.  Abdul lives in Brown Deer with his wife, Elizabeth and their two children.